Not sure why the hysteria over this new “Swine Flu”. More people die from the normal flu each year than this one. Check out this from FoxNews.com. Mainstream media is so worthless…hence the reason we have Obama as President.

Fukuda said there is no evidence that the virus is spreading from pigs or that it is unsafe to eat pork.

Authorities sought to keep the crisis in context: Flu deaths are common around the world. In the U.S. alone, the CDC says about 36,000 people a year die of flu-related causes.
Children, especially those younger than age 5, are particularly vulnerable to flu and its complications, and every year children die from seasonal flu.

According to the CDC, more than 20,000 children younger than age 5 are hospitalized every year because of seasonal flu. In the 2007-08 flu season, the CDC received reports that 86 children nationwide died from flu complications.

As of April 11, CDC had received reports of 53 seasonal flu-related deaths in children during the current seasonal flu season.

Still, the CDC calls the new strain a combination of pig, bird and human viruses for which people may have limited natural immunity.

Hence the need for a vaccine. Using samples of the flu taken from people who fell ill in Mexico and the U.S., scientists are engineering a strain that could trigger the immune system without causing illness. The hope is to get that ingredient — called a “reference strain” in vaccine jargon — to manufacturers around the second week of May, so they can begin their own laborious production work, said CDC’s Dr. Ruben Donis, who is leading that effort.

The first doses of a swine-flu vaccine could be available about 15 weeks after the World Health Organization decides what kind of vaccine it wants companies to produce, Sanofi-Aventis SA’s chief executive said in an interview with the Wall Street Journal.

Great stuff from an email:

If someone in a Lowe’s store offers you assistance and they don’t work there, you may live in Texas ;

If you’ve worn shorts and a parka at the same time, you may live in Texas ;

If you’ve had a lengthy telephone conversation with someone who dialed a wrong number, you may live in Texas ;

If ‘Vacation’ means going anywhere south of Dallas for the weekend, you may live in Texas ;

If you measure distance in hours, you may live in Texas ;

If you know several people who have hit a deer more than once, you may live in Texas ;

If you install security lights on your house and garage, but leave both unlocked, you may live in Texas ;

If you carry jumper cables in your car and your wife knows how to use them, you may live in Texas ;

If the speed limit on the highway is 55 mph — you’re going 80 and everybody’s passing you, you may live in Texas ;

If you find 60 degrees ‘a little chilly,’ you may live in Texas ;

If you actually understand these jokes, and share them with all your Texas friends, you definitely live in Texas . 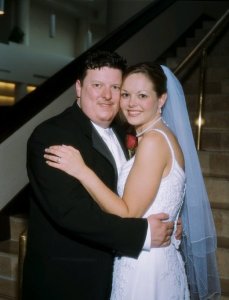 Six years ago, I talked an incredibly sexy, smart woman into saying “yes, I do” and marrying me. I cannot believe I have been so fortunate all of these years!
Ok, so maybe the headline of this entry is a tad stretched, but the truth is, the last 6 years have been truly incredible. God is giving us a great story and road to travel on. I can only pray that one day there will be a “0” behind the 6, even though I would be almost 99 years old it that happens!
Here are some great wedding day memories. More photos on facebook!

Twelve months ago, we became a family of five. Read the story. God is good!

Took the kiddos out for our annual bluebonnet photoshoot Saturday near Ennis where my grandparents had a neat farm. Love it out there and it is always the perfect backdrop for some kid pictures.

Most men I know play golf. Outside of my brother-in-law, most of those same men are about as bad as me. Now, don’t get me wrong, I only play maybe 3-4 times a year and live with a golf course right in our neighborhood.

It’s a strange love affair we have with this game. We can’t figure it out, yet most of us cannot get enough of it. Make “pars” on each round and you are a millionaire more than likely. Shoot just 2 shots a hole higher and you are like me, bound to spend millions trying to get better.

This week I experienced the true height of this incredible game as I was flown out to Augusta, Georgia, by one of our insurance providers for some practice rounds for the 2009 Masters. Only the best of the best get to play in this annual tournament worth millions, and it is a truly “members only” club. Rumors are that it took years for Bill Gates to get invited to become a member and President Bill Clinton was never invited though he repeatedly stated he wanted to play there.

This place is unreal. The grass outside of the course grass is so manicured it looks fake. Nothing like you see on TV. The course itself makes any other look like a putt-putt course. How anyone can par this course is unbelievable to me. As we sat there on “Amen Corner”, between holes 11, 12 and 13 watching players tee it off just feet away from us, I was truly in awe. Not only were these the golfers we admire and watch as we nap on Sunday’s, this place in every facet represented excellence to the extreme along with an old fashioned sense of integrity.

You could buy a small chair, set it up anywhere, put your belongings in the chair and leave for hours only to come back and find nothing was disturbed even if your chair was in the best spot on that hole. Lunch cost you less than $5. Beers were $2.50 and cokes were $1. Everyone was respectful, polite and incredibly helpful. The players themselves were fun, light hearted and super nice. Gift shop items were set at Target prices. And, trash was no where to be found. Even those that smoked put their butts in a trash. I was floored.

The Master’s is truly a Masterpiece.

It’s always something when it comes to getting more than 6 hours sleep at one time. Here it is 4:30am and what are most American’s doing right now? Yea, updating their blog….

Whether it’s the girls, our boy, thunderstorms, my “can’t stop thinking” brain, snoring, the dogs, or being sick, there is bound to be something get in my way.

Tonight is another of those nights.

At least I have the Internet so I can read up on all the crazy happenings in our world and the people that either killed themselves, or others during the last 6 hours.

Whew, without that, I would really never get any sleep.