Few lives have ever been lived like that of Kathrine Barton Speers. And few people have ever lived life like she did. We knew her as “Grandma Kat” and other than Jesus Himself, there just wasn’t another better as a person than her. 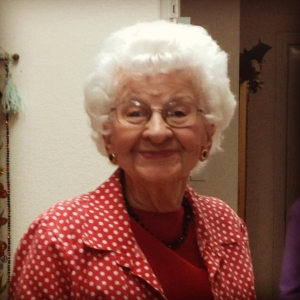 She was the Fruits of the Spirit. All of them. She made the Ten Commandments and 1 Corinthians 13 look like a walk in the park. Talk about a constant witness for God…She was selfless, loving, caring, patient, kind and best of all very, very funny.

Born on January 23, 1923, and spending most of her life in the Dallas/Fort Worth area, she ended her earthly journey and received her eternal reward on January 12, 2018; this close to 95 years of a life few can ever imagine. She is survived by her daughters Linda and Janet and her youngest son Troy. Her family included four children, seven grandkids and nine great grandkids. Her husband of over 60 years, Jack Speers, passed away in 2004 and her oldest son, Charles Jack Speers, passed away in 2017.

There are so many stories to share when someone has walked the earth for almost 95 years. So many experiences. She has lived through and seen the Great Depression, World War II, watched the space race and then a man landing on the moon…the growth of color TV and automobiles, the invention of air conditioning, color cameras, cell phones and the Internet. She has watched Cowboys Super Bowls (remember those), the assassination of a President, the impeachment of another President, the Civil Rights Movement and the rise and fall of the USSR.

I could go on for days thinking of all the things that her eyes have witnessed. In a nutshell, she lived a long, long, long time and she never waivered in who she was.

Despite all of those, she would be the first to tell you that the best thing she experienced in all of those years was finding Jesus as her Lord and Savior. She spent her life learning who He was, learning to live as He lived and doing all she could to share His love with those around her.

She made it her mission to ensure that our family was united and close. She made sure everyone got the change to her God’s word and did all she could to keep us all in line. She understood the importance of living this life to the fullest while preparing for the life to come. She was this close to Jesus on a daily basis and few Bibles have had more pages turned.

There aren’t enough pages to write all she meant to us as a mother, grandmother and great grandmother. Whoever comes in second place as “Grandma’s of the Century” will be a distant 2nd. She took us fishing, played countless games of “Sorry” with us and back in the day learned how to beat us in Atari followed by Nintendo. She made the best homemade dinner rolls ever (some of you have had them) and I will never forget all those summers my sister and I got to spend with my cousins at “the farm” in Ennis, TX. Her and Papa made my childhood a dream. Even as a great grandma to my four kids, she left a mark in their lives and it won’t be the same without her there. I guess we are going to have buy and do a puzzle each year as a family in her honor…

She was truly one of a kind and the world has lost another important piece of what is still called “the greatest generation that ever lived”. She grew her own food, took care of a husband, four kids and a farm. She sewed her own clothes and up until these last few years hand made quilts by hand, something few even know how to do anymore.

My dad even caught her trying to climb up into a tree with a water hose during a drought filled summer…she was 90 when she tried doing that. She broke her arm in her late 80s and drove herself to the ER, without calling a single person because she didn’t want to “bother anyone”.

This was my grandma. Always saying yes, always smiling and always making those around her happy. Her pastor told me the day she died, “I don’t know what we are going to do without her. She meant so much to our church family.” At 94 she was still hosting class parties, serving in the church every Sunday and never missed a chance to help. She was the life of the party.

On one of those last days, I was able to grab a few minutes with her in the hospital alone. I kissed her on the forehead with tears running down my cheeks and rubbed my hands through her beautiful white hair. I said “you were the greatest Grandma a little boy could ever have”. She smiled with tears of sadness and joy in her eyes as we both realized she would soon step over to the other side. She told me she couldn’t wait to see my Grandpa and my dad again. What a reunion that must have been just a few days later!

My heart breaks thinking about how many things are now going to change without her around. It just won’t be the same. She was the cog for many wheels. A very large empty chair can be overwhelming to think about. But she has won her race and passed the torch to us to carry on and that we must. Even if we only fill one of her shoes, we will have made her happy as she watches us from above.

One of her favorite songs was “I’ll Fly Away”. Some of her grandkids sang it to her at Christmas just a few weeks before she died. It has these words…

Fitting that she died on a bright, sunny morning. I couldn’t help but think that was just a little reward from Heaven of a job well done….for a life lived like few ever have.